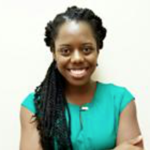 "Last year we were off to a great start before we had to end. Looking forward to watching this team grow this year!"

Uchenna is entering her fifth year with Metro as the 14s East Head Coach. Originally from Indianapolis, IN, Uchenna comes to Metro VBC with nearly 20 years of volleyball experience, culminating in 4 years as a middle hitter at Marshall University. At Marshall, she was a part of two Conference USA championship teams and selected All C-USA second team member in 2006. Uchenna began coaching while still a player at Marshall, coaching ages 15-18 with River Cities Volleyball Club from 2004-2007 and the Spring Valley Cobras in 2009. She is currently the assistant coach at Bowie State University.

In addition to her personal experience and love of the game, Uchenna brings extensive experience in athletics, strength, and conditioning, and injury prevention. Uchenna moved to the DMV area in 2009 to pursue her physical therapy degree at the University of Maryland, Baltimore. She currently works as a doctor of physical therapy (DPT) in Kensignton, Maryland, and provides player performance and skill development training through her company, VBFiT.  She also holds a degree in athletic training and is a certified strength and conditioning specialist.